Last night was hot again and I was craving for something cold and sweet but not too sweet. These days, it’s hard to find desserts that are not filled with sugar, too much fat or both. Luckily, I still had some raspberries and blueberries left. I had cooked them lightly with a couple of tablespoons of water and honey and saved them in my fridge. The only thing left to do was to mix them with some yogurt and roasted almonds to make what you see in the picture. It was tasty and made me very happy… 🙂 Happiness is in the simplest things if we really want to feel it. 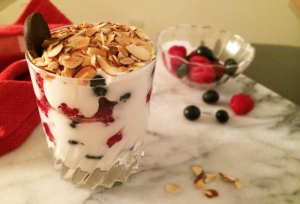 A friend of mine is a savvy traveller and travels frequently for business and pleasure both. Recently, he was in Brazil for the World Cup games for 3 weeks and now in love with the culture and people. I remembered I had the same experience when I visited Costa Rica. A country with amazing coffee, breathtaking views and happy people. The majority make very little money and live a very modest life but still know how to live and have fun. They’re a happy nation and generous with their guests.

One day, my friend and I missed the bus that was supposed to take us to see the Monkeys. We had made elaborate plans weeks ahead of time and this tour was one of the highlights of our trip so we could NOT miss it. I asked the doorman at the hotel if he could help us to get a taxi but he told me it would take at least half an hour to get a taxi where we were and by then we would have missed the tour! It was a disaster and we were both frustrated. Looking at our sad faces, the doorman asked us to wait there for a few minutes and disappeared. After about 5 minutes, he came back with another guy, :” I found you a solution!” he said smiling. “He’s off his shift and can take you there.” The other guy, Luis, was one of the hotel personnels leaving after a 10 hour shift. We told him it was a long drive and we didn’t want to bother him being tired and all but he smiled and gestured to follow him, walking toward his truck. During our drive, he kept us entertained with funny stories about the monkeys, like how to handle the Capuchin monkeys who are firmly convinced that they are the righteous owners of all bananas of the world! ( or any food for that matter!!), don’t be scared of Howler monkeys who may sound scary but are 100 percent peaceful vegetarians, and spend more time with Spider monkeys who are the most intelligent monkey species in Costa Rica. ( as it turned out Spider monkeys truly are the sweetest animals I’ve ever seen.) 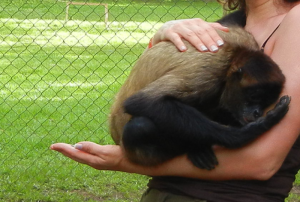 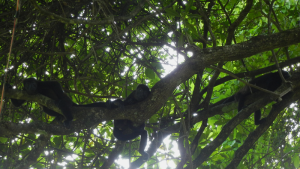 The most humbling part of this experience was when we got to our destination and he didn’t ask for money. Of course, we convinced him that’s they way it’s done in the US and payed him in the end but the fact that he was sincerely enjoying the ride as were we, trying hard to make an interesting conversation with a broken English and doing a good job at it too, made me think about happiness in a new way. Money can bring more convenience but not happiness. All the joy in the world is inside us if we pause and look a little deeper.